This has to be the part of parenting I have been dreading the most, Potty Training!  Obviously I liked the idea of not having to buy nappies any more but I often watched frantic parents chasing around a shop with a toddler in tow desperately looking for a toilet and public ‘accidents’ filled me with terror.  I do find though that when I over worry about a situation, it nearly always turns out fine and this has been exactly the same.  From watching friends go through potty training and from being told to not rush it (especially with boys) I kept putting it off and then on my son’s 3rd birthday I knew the time was right.

I’d bought a boring white potty months ago and had it in the bathroom but every time I asked if he would like to go on it he would act petrified and run away.  After several weeks I thought maybe he just doesn’t like a potty and I bought a £2.99 toilet seat with planes on from Home Bargains and when I asked him if he would like to go on the toilet he leapt on and did his first big wee!  He wouldn’t do it during the day but would happily hop on before his bath.

Before I went full steam ahead I wanted to be fully prepared and bought a Potette Plus which I was told was great for being out and about and actually we have used it already in a car park haha.  It’s quite small and can either be used to put on a toilet or it clips into place and can be used as a potty. You can put bags in it although I’m not sure if I would bother if I was on grass.  I’m also told it’s great for car journeys if your child gets travel sick.

I also had to make sure I made no plans for 3 days and fortunately chose wet miserable one's so I wasn’t all that bothered with staying in.  I made sure we didn’t need any food shopping and had some ideas for crafts, baking and fun stuff we could do indoors.  As soon as Sam got up I explained he was going to be a big boy and told him that today he would wear big boy pants and no nappy which was met with a smile.  Now this is where I believe I may have made a mistake, I told him that if he does a wee or poo in the toilet that he will get a little chunk of chocolate.  I mean, it worked, we had every wee and poo in the toilet but on day 2 he thought I was Willy Wonka and must have asked to go to the loo about 30 times!!!  He didn’t get chocolate unless he produced but boy did he try!!!  This was obviously cut out on day 3 when I told him we had run out.  (I’ve been told that stickers work well too and have much less sugar).

Our only accident whilst we were at home was on Day 2 when our road and pavement outside flooded and so I thought it would be fun to get our wet weather gear on and go out and have a look.  We spent about an hour splashing and watching the cars drive through plus he screamed with laughter when we were dodging the tidal waves.  We weren’t out there for long and Sam said he’d done a wee so we ran in, got changed and went back out to which 5 minutes later he did it again.  Again, my mistake was to not plonk him on the loo before we left and to maybe not take a child whose potty training to go and play with water!

Day 3 and we both had serious cabin fever so I told him we’d go to Toys R Us and spend some of his birthday pennies as he’d done so well being a big boy.  I won’t lie, I was pretty worried about leaving the house and it was quite funny when we were at Fleetsbridge and he said the dreaded ‘I need a wee’ so I calmly told him as soon as we pulled up that we would head straight past the toys to the loo but that I promised we would go back and we were both giggling when we went in and I was pleased I had remembered where the loo was.  Job done, back to the start of the shop and there was a photo booth with a nice lady who told us we could have our photo taken with a Power Ranger which was fantastic because I now have a permanent reminder of our potty training days.  An hour later and 3 trips to the loo we were done and took a nice new toy home to play with. 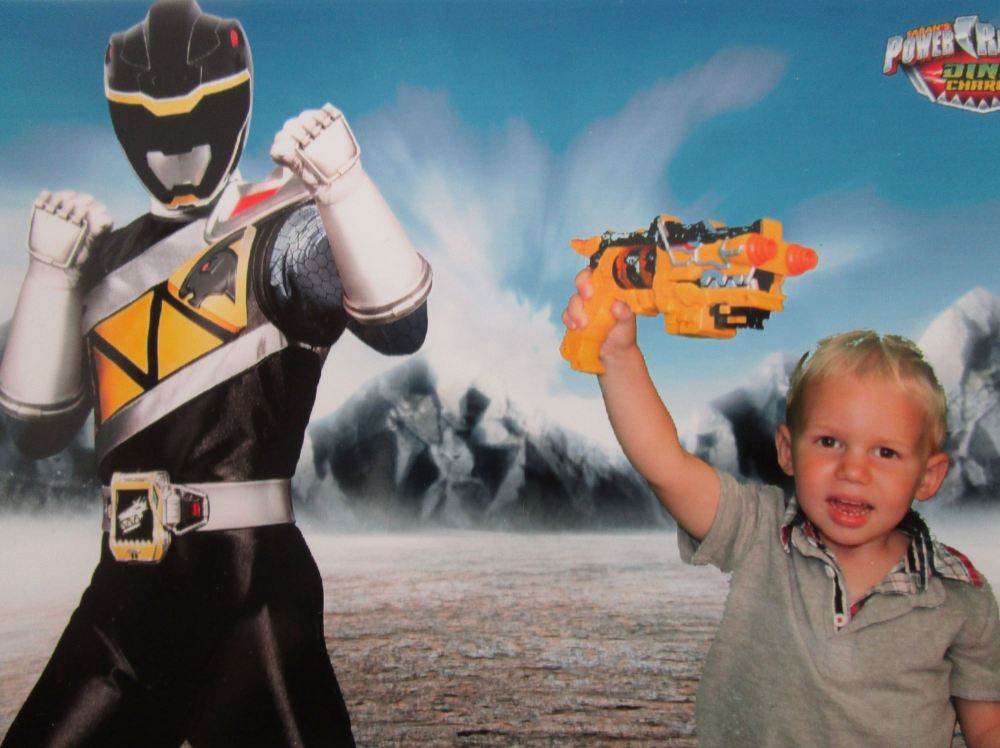 Since that day, I’ve not been worried about going out and I’ve now learnt to take him to the toilet as we leave the house and to always ask if it needs it when I am near a public toilet.  Our only other accident out of the house was at the weekend when we were queuing for a bouncy castle slide and he was so transfixed watching the kids having fun that he just simply forgot.  I did feel bad though because I quickly cleaned up and whipped him out of the queue to change him and when we went back the queue was twice as long.

If I were to offer any advice it would be to wait until you have the communication whereby they can say I need a wee or poo.  I have heard of the method where you put them on the potty every 20 minutes but I had also read that this means they don’t have the chance to feel a full bladder and that it could also cause bladder infections (don't know if it's true or not).  I also knew that with every important stage in the last 3 years it seemed that my son was the one to tell me when he was ready and when I had older family members or friends say ‘oh, is he not potty trained yet?’ or ‘my son was trained before he was 2’ I just bit my lip and explained that every child was different.  And I’m glad I did.  We started 8 days ago and he’s had no accidents during nap time and his night time nappy has been dry for 4 nights so I know we’ll be able to cut that out too.

So if you’re looking to start soon then I wish you lots of luck, try not to worry too much and make sure you ALWAYS have a change or clothes wherever you go.