Our Monster Truck mad son had seen a trailer for Monster Jam on the TV earlier in the summer and begged to go so we decided for his birthday that we would get him a few more hot wheels trucks and tickets to the show in Cardiff.

From Dorset it was a long old drive but we were there in time for the Party in the Pit which meant we could get up close to all his favourite trucks and the atmosphere was electric! 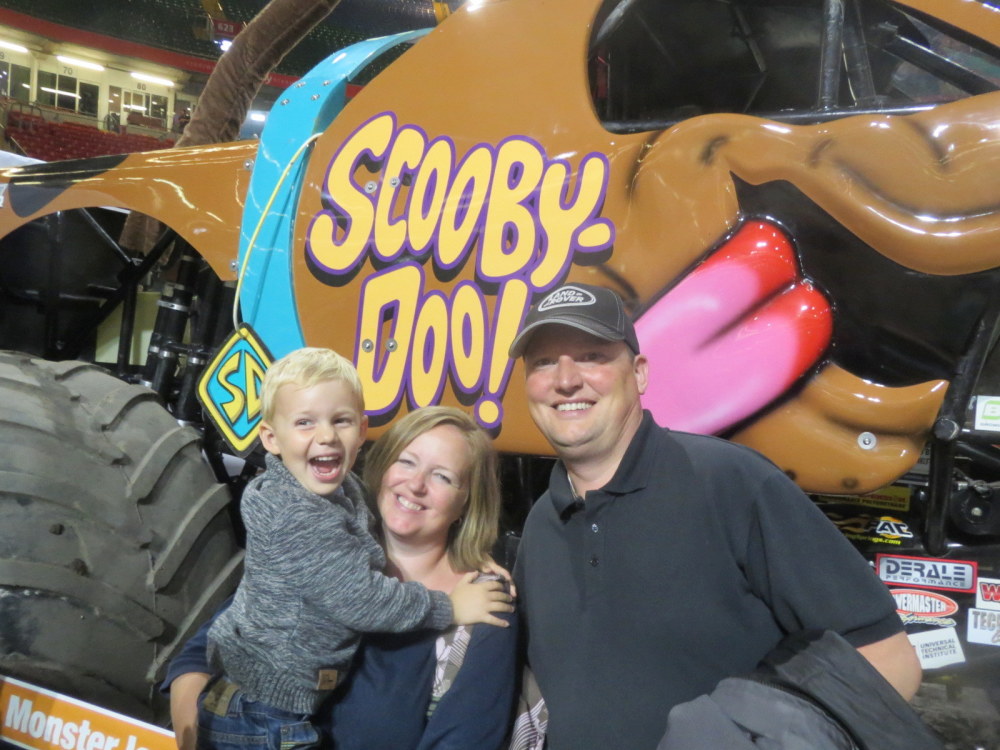 Being only 4 years old Sam had no interest in joining a long queue to meet the drivers and this worked out fine for us as we still got some great pictures.  After going around each and every truck and having a bounce on the inflatable Sam spent ages watching the little radio controlled trucks doing their jumps and stunts.

I’m so pleased we had decided to leave baby Lucy with Nanny as it meant we didn’t have to worry about all the noise and Sam was happy to wear his ear defenders pretty much the whole time we were there.  Before the main show started we went for bite to eat in Cardiff and then headed back to the Principality Stadium to find our seats 3 rows from the front.  By this time Sam was super excited but tiredness was setting in so we were doing our best to keep his energy levels up.

I never thought 4 years ago that I would be so excited to be sitting in a huge arena waiting for Monster Trucks but when the countdown started I held Sam close and his face was a picture when the trucks came in roaring louder than I ever imagined! 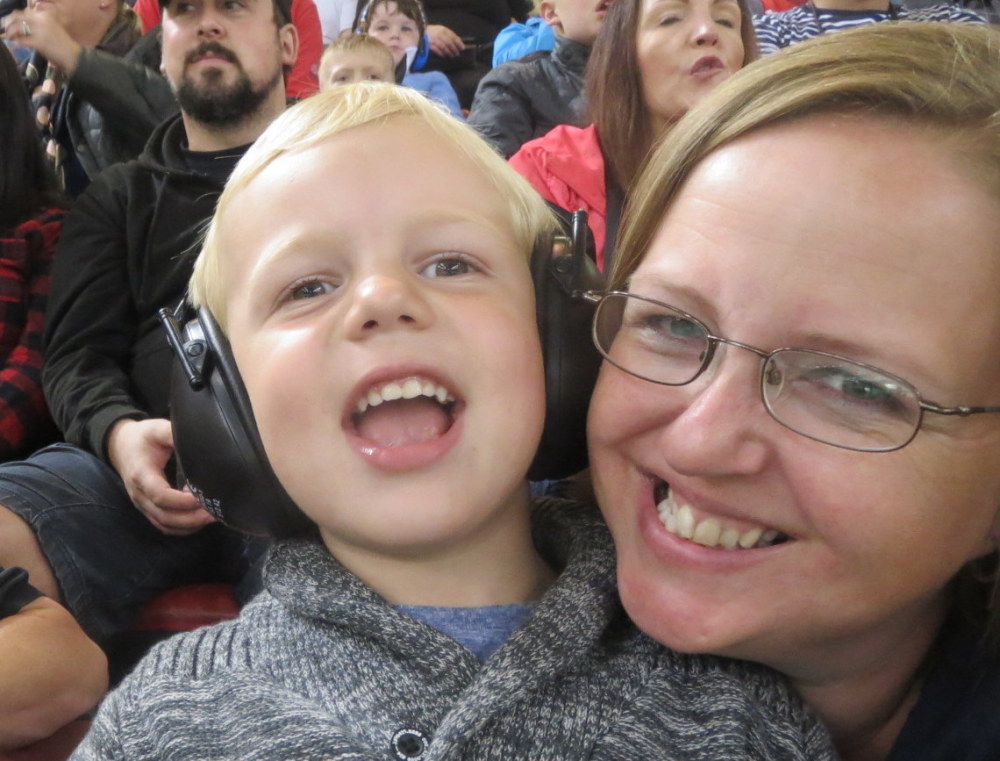 One by one they came in to circle the track and I couldn’t believe it actually brought a lump to my throat as I knew Sam was just in utter heaven.  In pairs the trucks raced each other around the track and we waited patiently for the part where they did big jumps and crashed around. 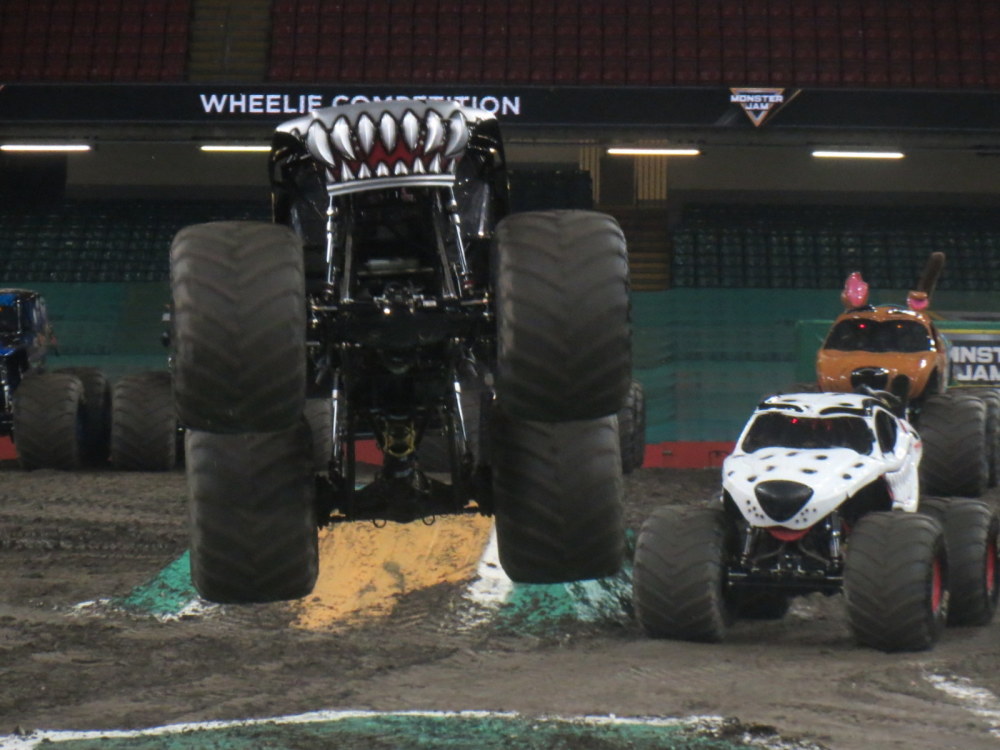 The freestyle round was by far the best and everyone cheered when the trucks went on their back wheels and jumped high up in the air.  Everyone loved it when the Zombie lost an arm and gasped when it looked like they’d fall over.  The most memorable stunt by far was near the end when ‘Son Uva Digger’ did a back flip and burst into flames right in front of us!  When the driver got out the whole stadium roared in applause and even myself and my husband were sat on the edge of our seats shouting!

In between our favourite parts there was another competition round and some fantastic dirt bike stunts which everyone loved.  And so came the end of the show and whilst it was a very expensive day out for us it was worth every penny.

Poor Sam was exhausted after being up for 12 hours and we headed off for dinner before getting in the car.  If you do find yourself in Cardiff and enjoy Turkish food then head to Efes BBQ which is a couple of minutes from the stadium.  It was the best meal we’d had in a long time and cheap too!

Thanks Monster Jam for coming all the way from America just to perform for my son (and a few thousand others).  You’ve given my boy THE most amazing memories before he starts school for the first time.  He had his teachers visit yesterday and he spent the whole time showing her every page of the official programme and bless her she did a good job at listening to it all.  The only thing I’m not happy about is that I now have a constant stream of requests for all the trucks he hasn’t got! 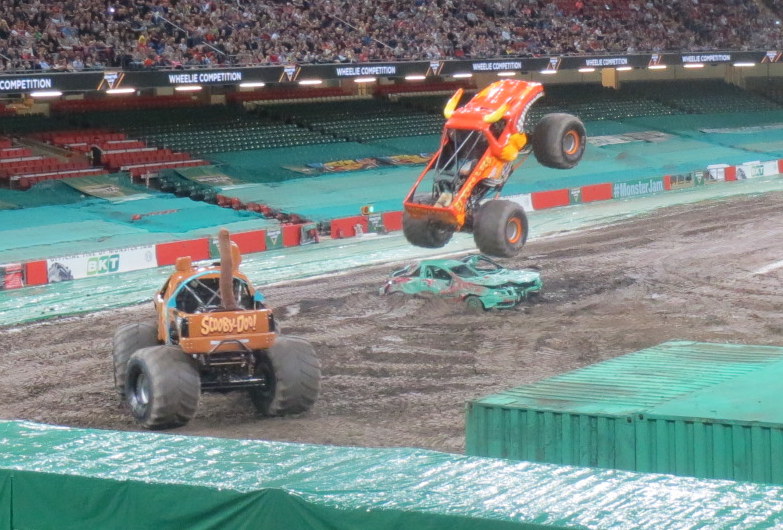