Look away if you’ve already started your post Christmas diet because this beast is not for the faint hearted!

I’ve made quite a few attempts of cheesecake over the years but I have to wait for a special family occasion because I can’t have a huge cheesecake sitting in the fridge in case I attempt to eat it all!  I’ve tried many recipes with the last one being to mix the cream cheese and cream together and it was a disaster!  The mix split and I was left having to rush to the shop in the morning to grumpily buy a cake.

Everyone has a preference on their perfect cheesecake.  Some like it dense and cheesy and some like it baked but I like mine light and fluffy without gelatine which the recipe below should give.  It won’t hold a perfect form when you cut into it but that doesn’t bother me at all and no one complained when they were tucking in on Boxing Day.

First you need to grease the bottom and a little of the side of your springform tin so the base doesn’t stick.  I used a deep 9 inch round but obviously you can use smaller and just reduce the ingredients slightly.

Then you need to bash up those biscuits or pop them in a food processor to turn them into fine crumbs.  Melt the butter and add it to the biscuits, mix well and press firmly into the prepared tin and then pop it in the fridge while you’re doing the rest.

Whisk up the double cream, but don’t allow it to go really thick (like I’ve done before), just make sure it has a nice bit of air in it and increased in volume.

Then you need to beat the cream cheese and add the sieved icing sugar.  Mix until it’s a bit lighter and then gently fold in the cream.

To make it more ‘Twixy’ I bought a can of carnation caramel and poured that onto the base before gently spreading the cream cheese mix over the top.

Put it in the fridge overnight and leave the decorating till the next day.  I chopped up about 6 mini twix’s and dotted them around the top and then I melted the chocolate in the microwave in 20 second bursts, put it on a piping bag and made a criss cross pattern on top.

Then for a final touch, (just to annoy my husband really) I sprinkled edible glitter on top and 'et viola' sheer cheesecake heaven! 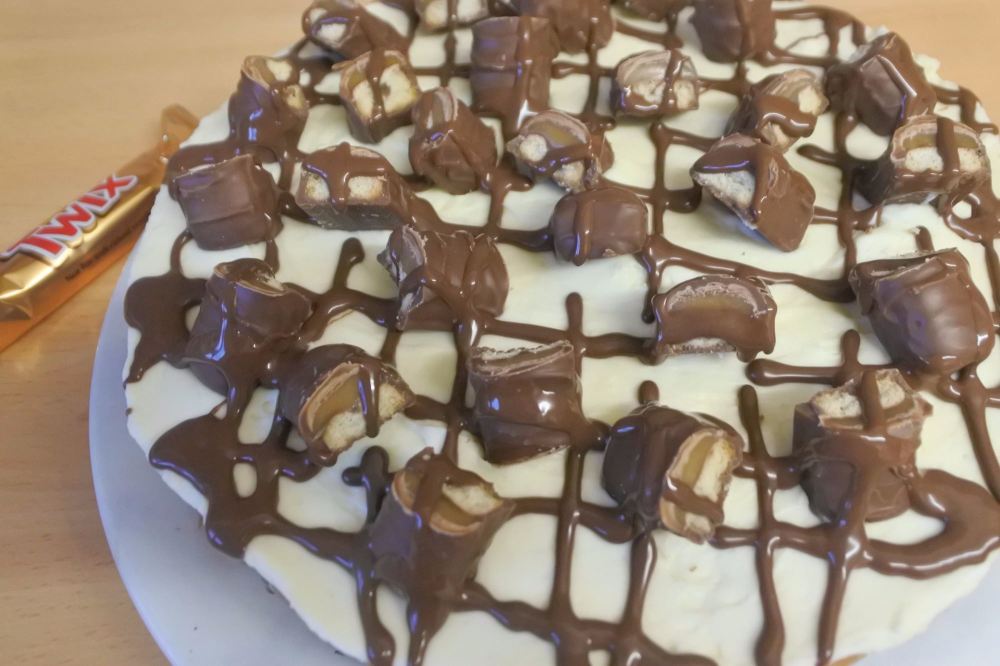 Now that I’ve messed around with several recipes and tweaked the ingredients to how I like them I’ll use this as a base to try other variations in the future.  I’m thinking options could be Forerro Rocher with a layer of Nutella, or Baileys with curled chocolate on top, Kit Kat, Caramac, Milky Bar, Mars or even an Eton Mess with chunks of meringue and fresh strawberries on top!

What would be your favourite topping?

UPDATE - Since writing, I have also had a go at making a toffifee which was very good but I regretted putting the chocs on the top in advance as they oozed a bit when I went to serve them and didn't look anywhere near as nice.