Bournemouth has really pulled out all the stops this year with a magical Christmas Tree Wonderland Trail which has over 100 trees and amazing illuminations plus there’s the SKATE ice rink and Moguls Bar, the Alpine Market and Lodge Bar and Santa’s Grotto. 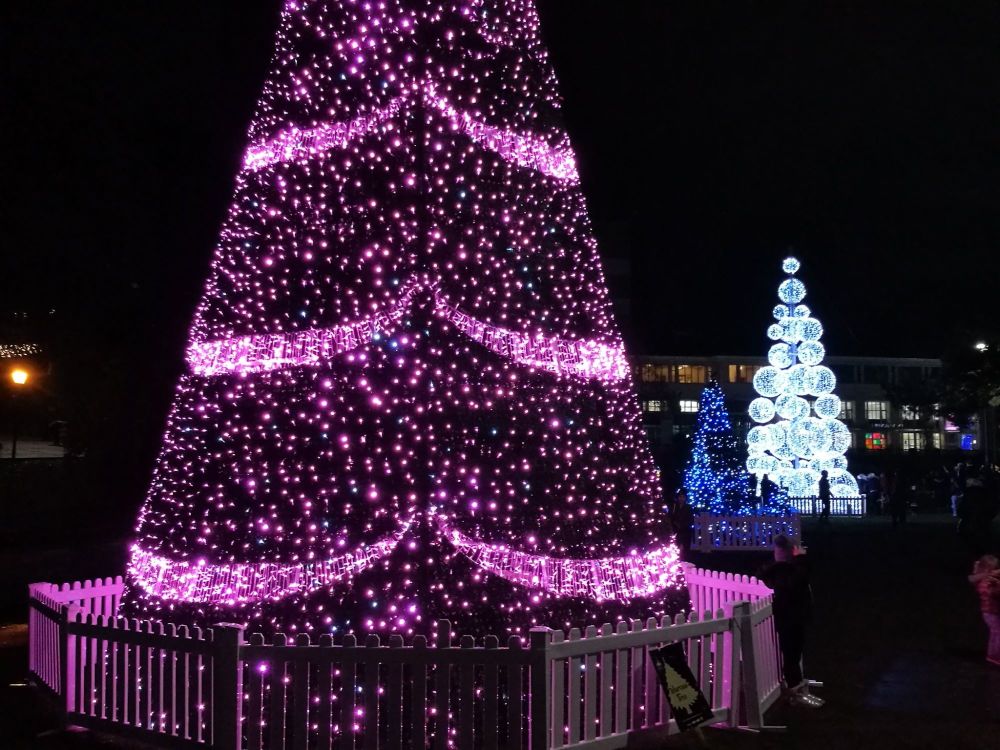 We arrived in Bournemouth mid afternoon and went straight into Moguls Alpine Bar to enjoy a deliciously warming and sweet hot chocolate which came with lashings of cream and chocolate goodies on top.  We took our drinks over to the log burner and soaked up the festive atmosphere whilst watching the ice skaters and working out our agenda for the next few hours. 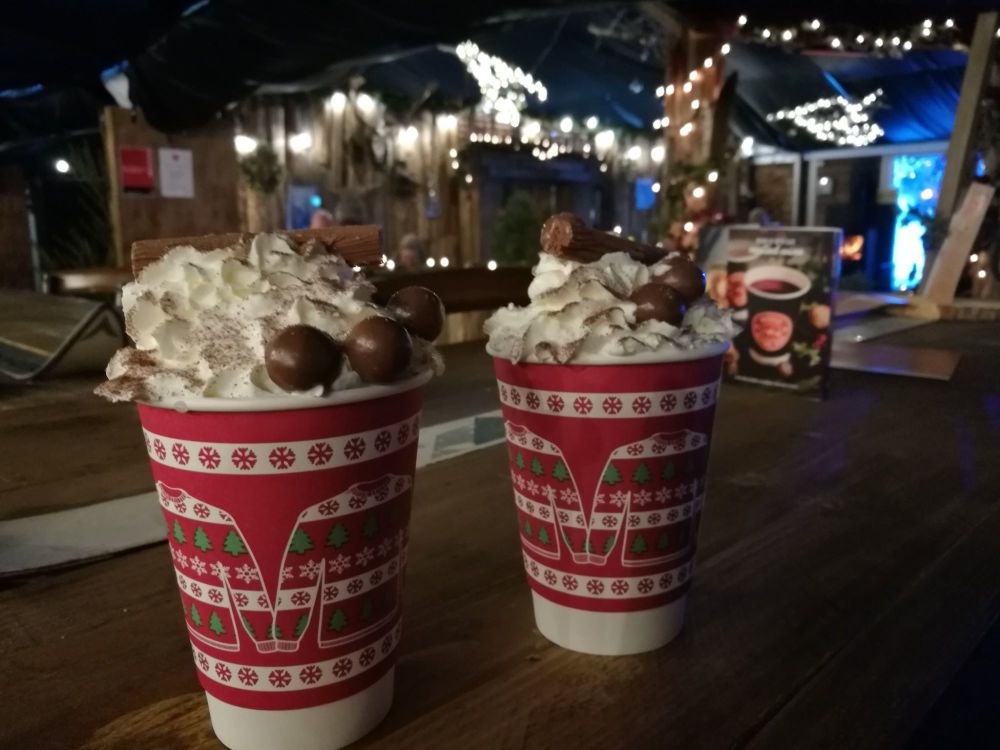 We were pre booked into Santa’s Grotto and our son and daughter were beyond excited.  When we arrived at our allotted time we were all greeted by a lovely lady elf who took us along a walkway and then inside a beautifully decorated room with huge wrapped sweets, gingerbread men and festive decoration.

She talked to our son Sam for a while about Christmas presents and being good whilst our daughter Lucy stood back taking it all in.  Then out of nowhere a very excited elf popped up and asked the children if they were ready to see Father Christmas and we were led into the Grotto which was warmly lit and beautifully furnished.  I desperately wanted to chuck the kids out the way and jump on Santa’s lap, but then I remembered I was the parent and composed myself haha.  Sam stood for a second until Father Christmas invited him to sit down which he did without hesitation.  Our daughter is always a little shy and clung to Daddy for dear life but still listened intently to everything.

Father Christmas was really lovely and instantly likable which I was pleased about as we've seen a few bad one's.  Firstly he mixed up the kids names which my son thought was hilarious and then as they were talking about the naughty and nice list he asked Sam if his Mummy ever nags him about anything?  Sam straight away told him that I’m always moaning about his messy room and then Father Christmas told him a story about me when I was a little girl and that he would come to bring my present but my room was always so untidy!  Sam thought this was absolutely brilliant and I loved the fact that us parents were involved when we’re often ignored.

He then asked Sam what we will put out on Christmas Eve and when Sam said he’d put a carrot out for Rudolph he told us that he’s sick of them and that we must put out chocolate instead.  He then told Sam that he’ll bet it’ll be gone in the morning and gave me a little nod haha.  Before we left we had a group photo together and then Father Christmas gave the children their gift which they thanked him for.

Outside the Grotto in other room we were told that we would receive a photo of our visit and I instantly adored the group photo that was taken.  They were quite a few other great photos which we could of purchased if we wished but we were really happy with the one we had. 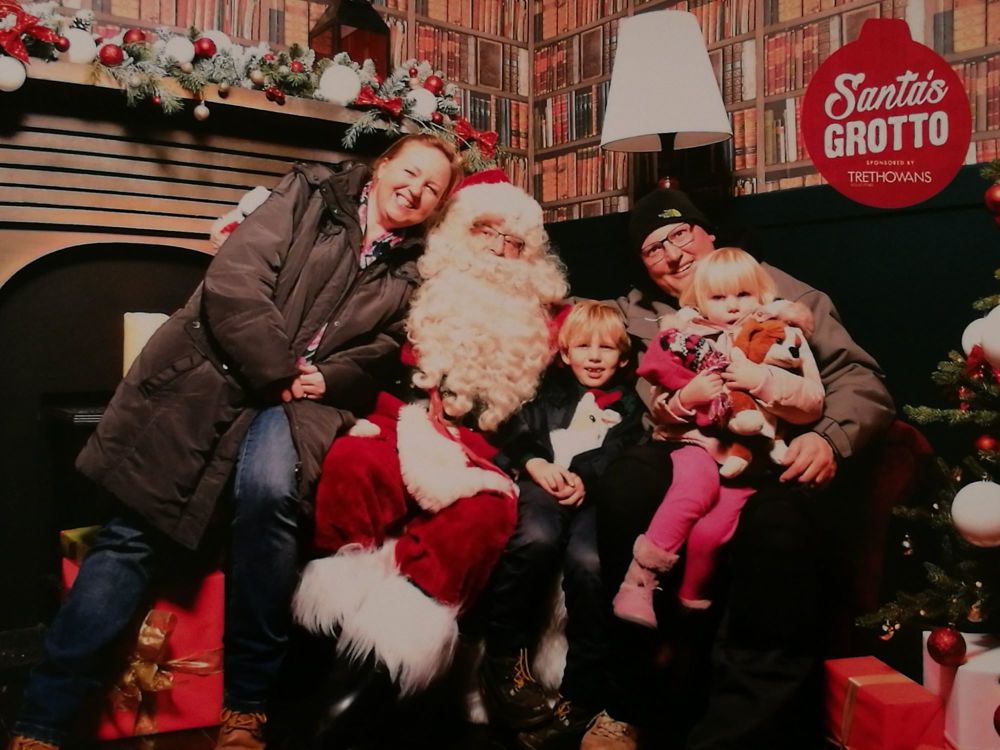 Santa’s Grotto far exceeded my expectations, everyone was really friendly and professional, the décor made you feel like you were stepping into a real Grotto and the children’s presents were far from cheap.

The children were desperate to open their gifts and Sam was delighted to receive a Flick to Stick Bungee game and little Lucy had a Micky Mouse and Finding Nemo book.  It was just starting to drizzle so we waved goodbyes to the elves and went to the Alpine Market to grab some dinner and find shelter.  Luckily for us we were allowed to purchase food from the Market and take it into the Alpine Lodge and whilst I went to get the kids food the gang made themselves comfy in a fun bauble seating area.  I bought bratwurst in a roll for us and my husband had a dish with salted beef, seasoned roast potatoes and raclette grilled cheese which he said was out of this world.

By now it was dark and with our tummies full we went back into the Lower Gardens to look at all the huge Christmas trees.  You can’t miss the biggest one which has a tunnel you can walk through.  The lights on this tree change colour and later on in the evening we also found out that it sings and flashes to the sounds! 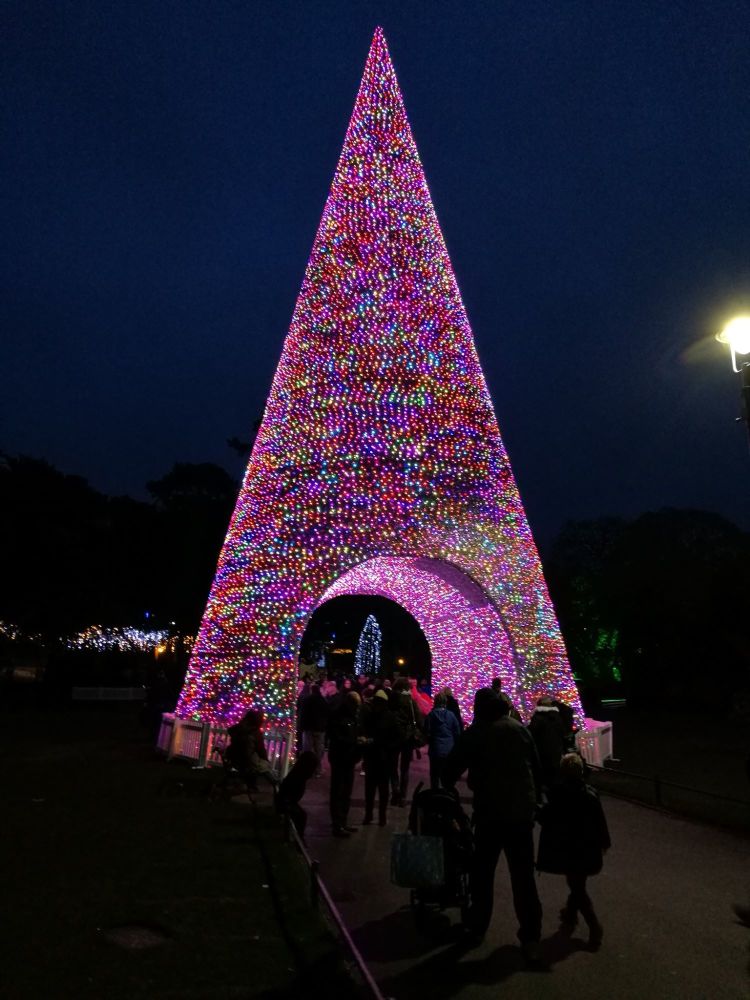 It took us ages to walk from here to the Pier as the kids had to run up to each and every tree and decoration.  Lucy adored the pink Barbie tree and Sam stood for ages watching the flickering lights flowing over the rocks by the Pavilion. 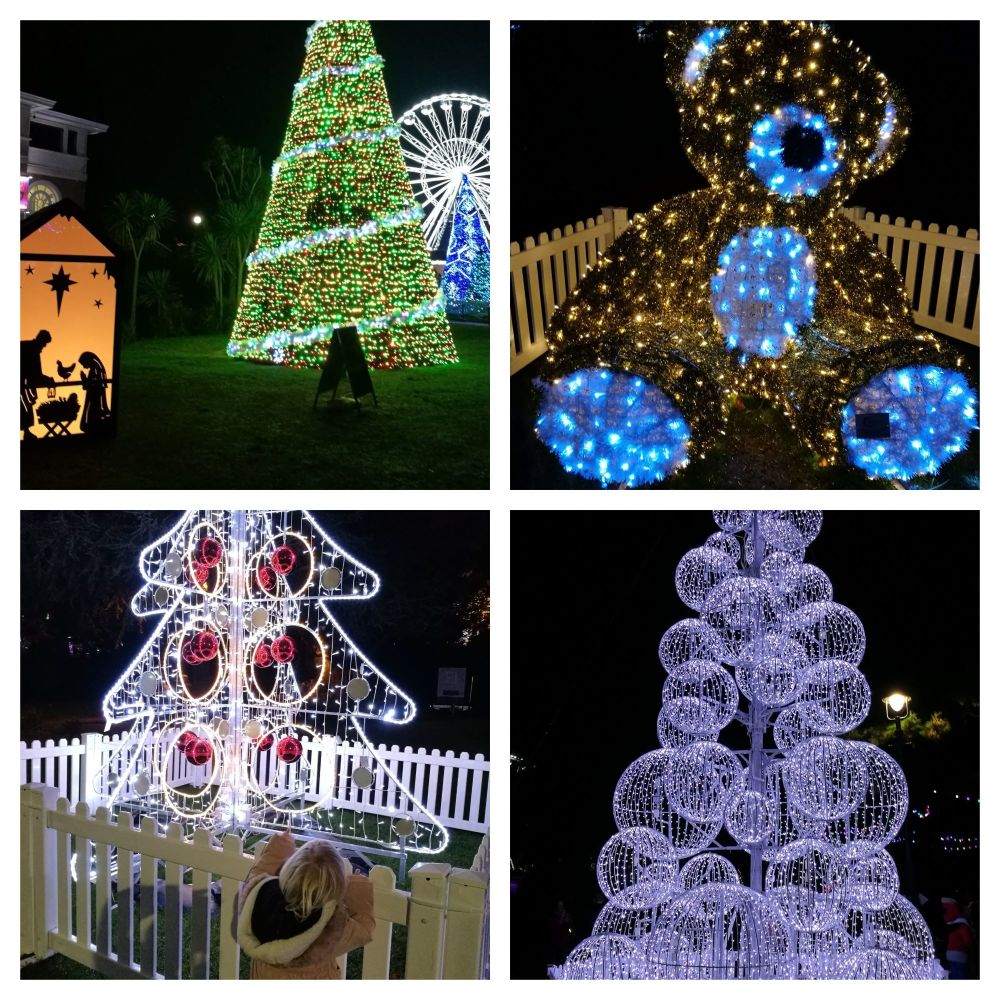 When we got to the Pier we told the children we would be going up in the Bournemouth Wheel and to my surprize the big one was nervous and the little one was thrilled.  We took some great photos in the Snowman and Father Christmas before queuing to go on. 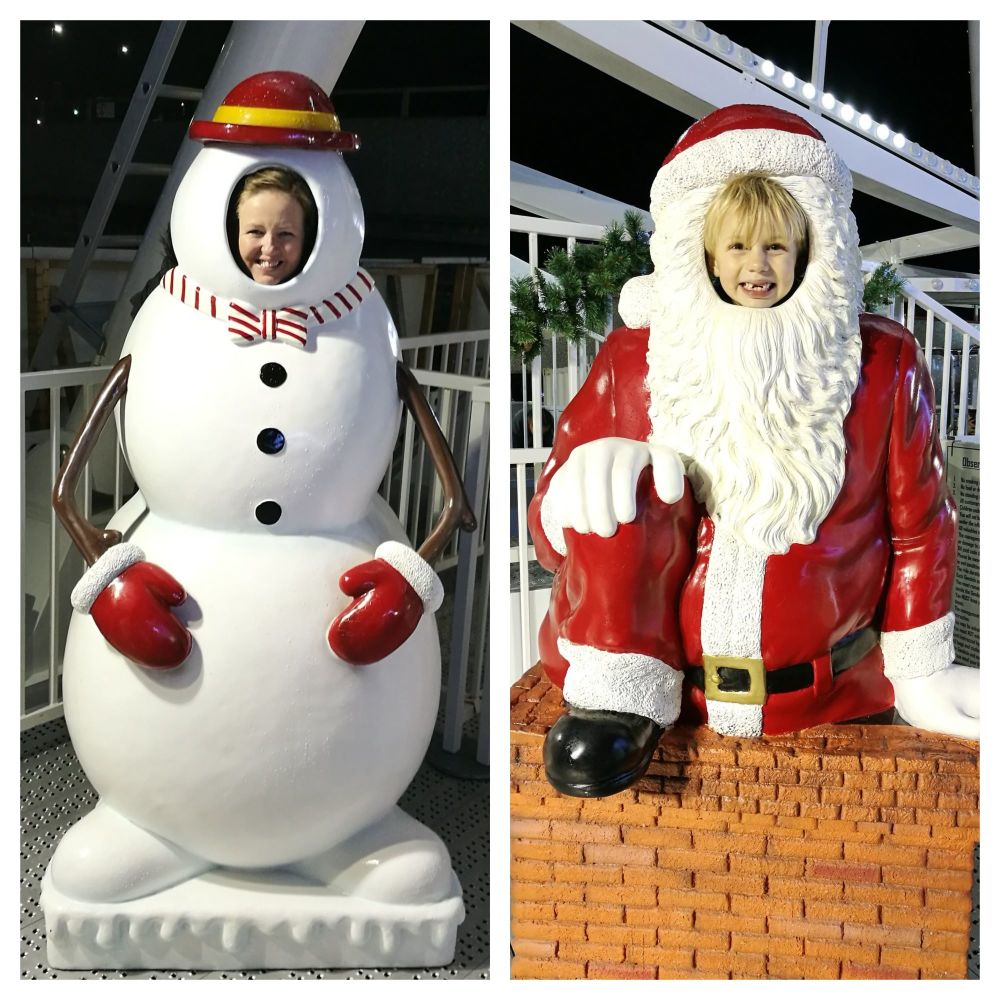 The views from the top are quite specular, but I won’t lie, I was holding on pretty tight!  We saw all the trees lit up in the gardens and after a couple of trips around and around we got off and went back in the gardens for one last stroll before taking 2 very tired and happy children home. 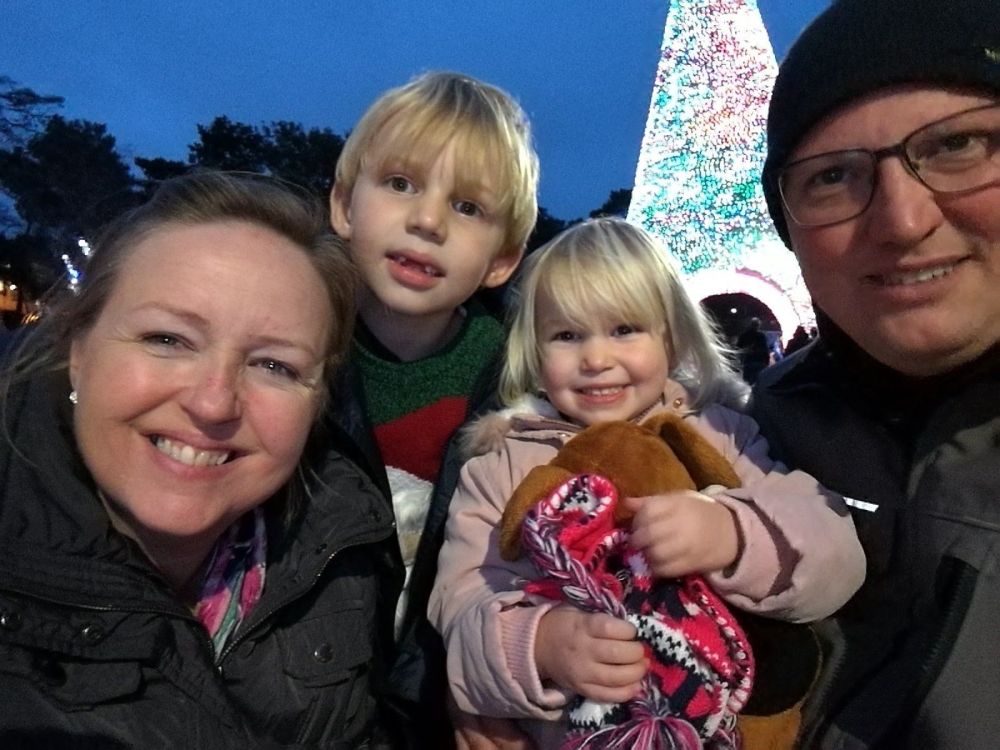 I would definitely recommend a trip into Bournemouth while all the festivities are going on.  There‘s a huge line up of entertainment at the Alpine Bar and in the streets.  Full details of events, Christmas Tree locations and Santa’s Grotto can be found on Christmas Tree Wonderland. 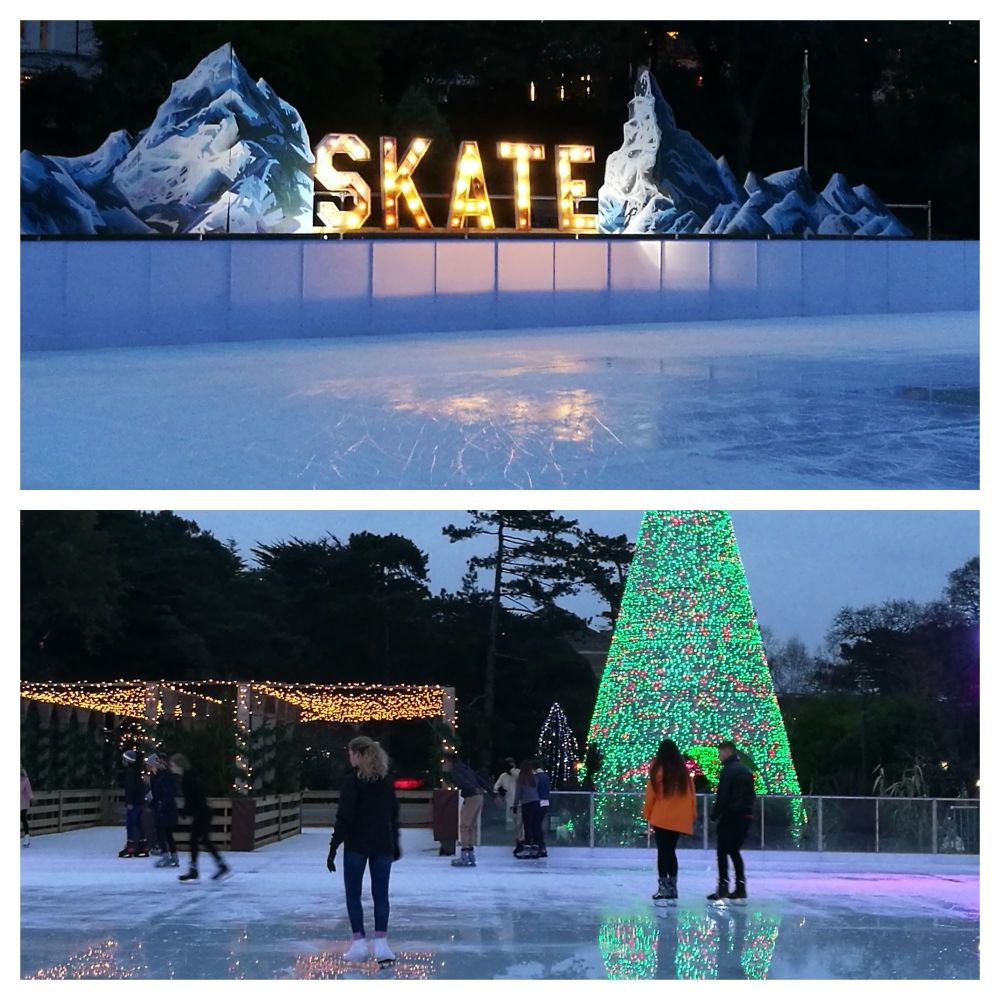 Whilst we didn’t visit SKATE on this occasion, we did go back for my birthday in January.  We had such a wonderful hour in the sunshine and the kids loved whizzing around on their skate aids.  I actually really appreciated them too as I was useless moving without having an aid to support me haha. 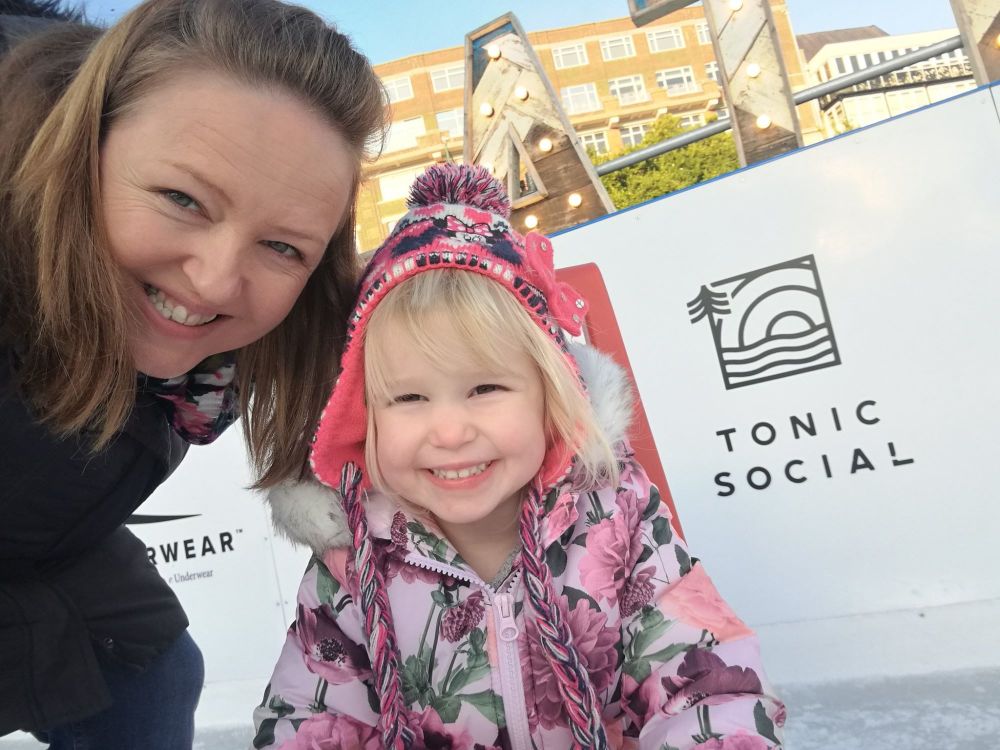